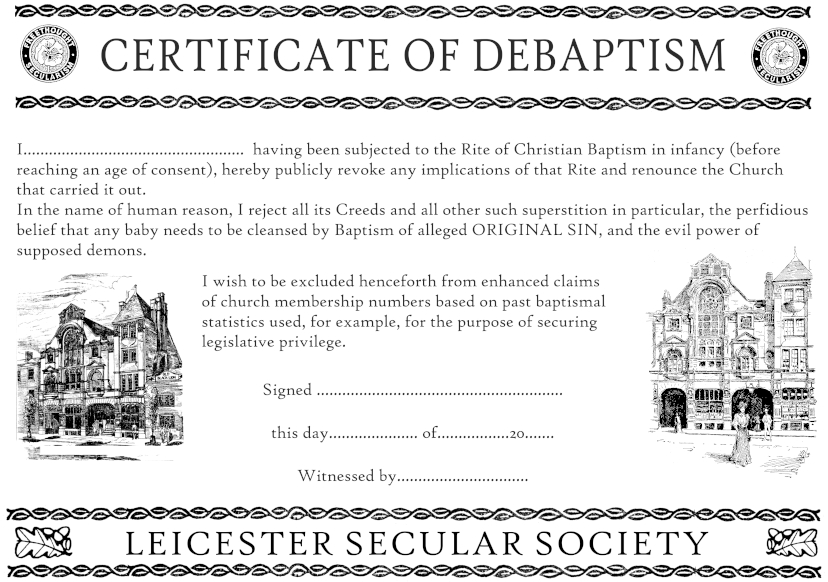 Leicester Secular Hall Company was formed to finance its construction. The lead shareholder was Josiah Gimson, an engineer, councillor and a President of Leicester Secular Society. Ownership of the Hall subsequently passed to the Leicester Rationalist Trust. The building was designed by W Larner Sugden of Leek, Staffordshire.

Report on the Opening of Secular Hall

About seven years ago the Secular Hall Company was formed, and very soon came into possession of a valuable site in Humberstone-gate, measuring some 2,000 square yards. There were houses on the property, and as the Secular Club, which was formed, only occupied a small space, the rents and profits from the sale of publications returned an annual dividend of five per cent.

The scheme, as at first entertained, proposed to build a hall suitable for unusually large meetings. This has not yet been fully carried out, but sufficient space has been reserved for the purpose, the present building not occupying more than one-sixth of the area.

The new premises occupy the site of the old Secular Club premises, numbers 75 and 77, in Humberstone-gate, which were taken down for the purpose.

The style adopted by the architect is a free treatment of Flemish renaissance, and the materials used for the front are, as is de régle with buildings aspiring at all to the picturesque, such as are presentable on the scene of harmonious colour.

Above the ground floor, which is built of best hard buff Darley Dale stone, the front is executed in very thin brownish-red Coalville bricks, with white mortar joints, except the moulded and carved portions, which are in bright red rubbers, and the pediment copings and similarly exposed parts, which are of the Mansfield stone. The portion of the front - the tower - constituting the house, has the regulation eighteenth century panes of crown glass, the windows falling in the gable of the hall proper, being all glazed with antique glass in leads. The roofs are covered with brown Broseley tiles. In the carved capitals of the five massive stone pillars which carry the front on the ground storey, are to be read the names of Socrates, Jesus, Francois Michael Arouet de Voltaire, Thomas Paine and Robert Owen; and in corresponding niches just above occur striking busts in red terra cotta of these worthies, while bronze belts round the pillars will be inscribed with quotations from their utterances. These five of the illustrious dead all hold high places in the Secular calendar as devoted world-menders and reformers, a sufficient piece of evidence to the very eclectic character of this workday Positivism.

The walls of the lecture hall, and of the various staircases and lobbies, are finished in red and white brick, and glazed and hand painted tiles of quiet colour, a very durable system of decoration. The roof and gallery are entirely of clean wrought woodwork, varnished without staining.

The accommodation comprises the following: -

The architect was Mr. W. Larner Sugden, of Leek, and the works have been very creditably carried out under his supervision by the following tradesmen: -

and Mr. Wllm. Bailey performed the duties of clerk of the works.

We were struck by a simple arrangement of lecture-room seats, made under his direction, and at his Vulcan Works, by Mr. Gimson, the chairman of the Directors of the Secular Hall Company. It is very strong, having wrought iron supports, of which the special feature is that they hinge the seat, which can be turned up, allowing the seats to be quickly placed out of the way against the walls for dances, promenade concerts, picture exhibitions, and such purposes, for which the Lecture-room, being well lighted from the ceiling, appears to be admirably adapted.

#1 Harry Hems did carved brickwork as can be seen on this house in London http://www.victorianweb.org/art/architecture/petogeorge/3.html where the carved panels look very similar to those on the hall.
#2 Urban Burdett, a builder who lived in Queen Street born c1838.
#3Tom S. Bromage born c1856 a master builder from 59 Grove Street, Leek (presumably brought in by Sugden).

Ned Newitt came across these press reports which throw some light on the adjacent property to the Secular Hall at 2 Yeoman Street. However he has not found out what the mechanism was for actually building the factory.

Mr. W. Simpson applied on behalf of the Secular Hall Company for power to alter the provisions of the memorandum of association so as to enable the shareholders to erect a factory on land adjoining the Hall now in their possession, to borrow money for the erection of the factory by way of mortgage of the property of the company, to let the factory, and apply the difference between the rent and the interest on the mortgage for the purposes of the company. — His Honour thought the application had better be made to the regular judge of the Court. It was new practice altogether. — Mr. Simpson said it would be as new to Judge Hooper as to his honour.-— His Honour replied that he did not think the matter was quite so clear as was represented. He thought they must take the original objects of the company and alter them in detail. — The application was accordingly adjourned to the next Court.

— Mr. Simpson, on behalf of the Secular Hall Co., applied for an order from the judge allowing them to purchase certain land at the back cf the hall for the purpose of building a factory to let. He said the application was under the Companies Memorandum of Association Act, I890, the object of which was to facilitate companies in altering or modifying the objects for which their memorandum of association provided, and to render it unnecessary to make a fresh application when they only desired to make some slight modifications. There was no opposition to tho present application, and the resolution recommending it had been passed unanimously. At the back of the Secular Hall, Humberstone-gate, was a piece of unused land which could not be utilised by the company. They had purchased three cottages adjoining, and now wanted to have the land in order to build a factory which they could let, and add thereby to their income. — His Honour did not think the proposal came within the objects for which the association was formed, and refused the application.